Very nice rest time had by all. Willy and Andrew thoroughly enjoyed their fishing up on the Skeleton Coast. They were amazed that you just cast a line into the surf and within minutes they had a fish on the line.

The guy that took them was interesting and had lots of information. Amongst other things they were super impressed with the mans BBQ in his kitchen. Sarah and I fiddle faffed about doing not much at all.

The streets in Swakop are , as I said, very very wide. They are made of salt that is watered and then rolled. Apparently cars don’t last long there.  Talking of cars – ours needed a bit more than expected done to it with some of seals, bands etc damaged after it recent hard time. Unfortunately this was the only Toyota dealer that has not been excellent.

The gravel roads and continual bumping has also taken its toll on my back, which is becoming increasingly sore.  However Voltaren, Norflex and sitting on a pillow in the car has all helped.

So after two lovely nights in the Corner stone guesthouse we left for Sossusvlei. The drive took us along the coast to Walvis Bay and then inland on what was to become over 800km of continuous gravel road. The skies were huge and there was just miles and miles of nothinG

Dry arid for miles and miles. Picture is of a prison gang. 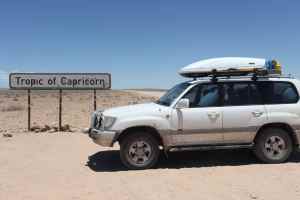 Ostriches to be seen everywhere and lots of Gemsbok (Oryx) . The Oryx have a special cooling system in their head that prevents their brain form overheating.

This part of the world is very hot and we reached a temperature of 50 degrees. On the way to Sossusvlei we stopped at a small village called Solitaire. Built by a Dutchman who had a dream of an “oasis” in the desert. He eventually fell out with the locals and left it. Now it is just a shell of a dream with a strange atmosphere.

We are only booked into Sossus for one night but have decided to stay an extra one as it would be too much seeing the dunes and getting to our next destination in one day. Our next destination quite happy to defer our booking and then the next night was meant to be Richtersveld National park – we will just miss out on that.

We stayed in the actual park of Sossusvlei.( in a Namibian govt owned lodge)  This has the advantage of not needing to wait for the park gates to open at six in order to go in and look at the sun rise. We were all praying for air conditioning in the cabins by this stage as the temperatures were firmly in the 50’s by now. Our little cabins were absolutely stunning but NO AIRCONDITIONING and honestly I have never been so hot. All of us made for our showers as soon as we had checked in . We all put the cold water on full and were surprised that it was hot, thought they may have been incorrectly marked so tried the hot, still hot??. Eventually it dawned on us that there simply was no cold water in those temps. You could have hot or hot. Water next to our bed – hot. We were so hot that we wet our towels laid them on our bed and then covered ourselves with a wet sheet and turned the fan on. It was like sitting in front of a huge hairdryer. Sarah and Andrew rigged up a system where they made a tent of the sheets stretched out above them, made holes in a water bottle and continually sprayed the sheet . Thus the air was cooled before it came through – innovative design for you.

The cabins at Sossusvlei. Namibian government owned and run.

Anyway the point of being there was to see the dunes – so the next morning up at 4.30 am , collected our packed breakfast and off we went. The dunes are absolutely stunning. The morning light is the best time as you see the shadows 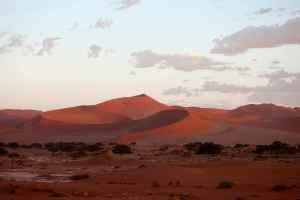 The climb up them is reasonably hard as the sand is very soft so you have to haul your feet out every step. The view however is a 1000 X worth it.

Sarah and I got slightly lost on the way down as we went to have a look at the dead trees in the vlei. We saw a lovely springbok who was totally unconcerned by us and continued grazing away and many other tracks from geckos, bigger buck and jackals. We then saw what we were fairly sure was the track form a sidewinder snake. They go up and down the dunes and bury themselves just below the surface. We had no shoes on by this time, as I said it was quite energy sapping but you have never seen me scale a steep hill so fast. 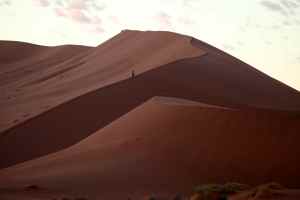 We made our way back to the lodge, the temperature was back up to 50 degrees again. I keep expecting things to self combust it is so hot.  It was unbelievable – we spent the whole afternoon trying to have a nap – but we were all absolutely boiling. Sarah had all the water and we had all the snacks. Neither of us could summon up the courage to walk to the next-door bungalow to swap. Willy washed his gel inner soles and put them outside to dry – they melted. No amount of wet sheets, wet towels, showers, hair wetting helped. Just lying absolutely still on your bed made you sweat continuously. Eventually at about 5.-ish it was cool enough to stagger up to the luke warm pool and join the rest of the guests just standing in the pool.

That night was our wedding anniversary and we had a lovely bottle of Moet, dinner and watched the waterhole. Baboons, gemsbok, warthog  came to drink.

Another hot night – most of it spent in the shower, wetting towels, continually shifting the fan, and generally trying to get cool.

All that said – it was definitely worth it to see those magnificent dunes. Put it on your bucket list it is up there with the Victoria Falls.

The drive the next day to our next booking (Aus) took us through massive plains with lots of Oryx, then into terrain that was like a moonscape. Piles of huge red boulders on top of each other, then enormous granite cliffs then huge plains again. In odd acacia trees on the way we saw the huge nests of the Sociable Weaver. These nests can accommodate up to 300 birds and they build continually onto it all year.

This is the sociable weavers nest – up to 300 birds nest together .

We got to Aus at about lunchtime – given it was so early we decided to push on to Richtersveld (which was where we were meant to be that night but had decided to miss out on) but hadn’t cancelled our booking) .Aus did not appear to have much to recommend it and the kind manager gave us lunch in lieu of our nights accommodation that we were forfeiting as it had been prepaid. On leaving we realized we had cut it a bit fine – so at speeds of 150km /h we hotfooted it down to Rosh Pinah.  Sadly the car did not feel like air conditioning us at that speed so we were back in 50 degree heat with no air con. After Rosh Pinah – there is about 20km of dirt road we had been warned to go slowly on. It was most like being on a rollercoaster. Steep ups and downs continually. The bad news was we got to border post 11 minutes late. As we approached it we saw a bakkie with all the customs people passing us. We looked across the Orange river and could see the Richtersveld rest camp- but no barge operating as the staff and gone home. Frustrating. So at this point we had paid for accommodation at Aus , had paid for Richtersveld, and still had nowhere to sleep.

We decided to head for the next border post that was 24 hours and head for Springbok in SA. Willy looked hopefully at the Orange River and thought he could see a crossing spot – but it didn’t seem wise. Once again a spectacular drive along the Orange River. Saw an amazing village (all employed at the vineyards) made purely of reeds from the river. 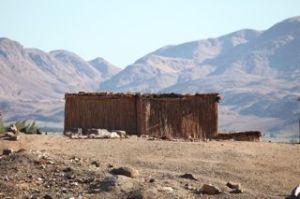 Grass huts made with reeds from the river

These vineyards were huge. We then saw a sign for river lodge with cabins right on the Orange. We stopped there, they had two cabins for us, THEY WERE AIRCONDITIONED !! and it was absolutely excellent. Their accurate temperature gauge for the vineyard read 48 degrees at 6.00 pm .

It is situated on the biggest table grape vineyard in the Southern Hemisphere. A very friendly dog and cat made our stay complete.

3 thoughts on “SWAKOPMUND TO SOSSUSVLEI”