A slightly late arrival was a bit unnerving as we had been warned to be in our tent at sunset or very soon after if we had a fire. So, it was a quick raise of the tent, a bit of fiddling to get the car level, a bit of moving to decide how close to the river bank we wanted to be, a bit of an argument as to the agility of the large crocs in the water and how fast they may (or may not) be able to climb the bank. No time to light a fire so we took out some gnocchi that we had bought at Woolworths and cooked it on the Cadac had that with cheese and to bed at about 6.15.

I have now seen that the wildness of Mana happens at night. We had not been in bed five minutes when a hyena came and investigated us and our campsite. Yip Yipping away he investigated us thoroughly before moving off. From then onwards we had a series of night time visitors. The hippos were grazing next to us, the jackal howling a little way away, the baboon barking, the Lions roaring, a symphony of African sounds. Believe it or not we were both sound asleep within a short time. Willy who routinely gets up at night to pee slightly worried about his ability to wait till morning. All was well. At sunrise, we got up and tried to decipher some of the footprints. Suffice to say I am not a great tracker and we didn’t get very far.

If the first night was a symphony, the next was a circus! There was a lion kill a short distance from our campsite and it felt like the whole of Africa’s hyena population descended on to the site and vented years of pent up furies on each other. The fighting and caterwauling was something to behold. I cannot believe their range of sounds. I’m sure a You Tube of the sound exists – if so , have a listen, and imagine that outside your canvas walls.

Day times are pretty uneventful here. Not very many roads so not a huge amount of game viewing to be done. Big herds of buffalo, wild dogs, ground hornbills, crocs, hippos, Eland, waterbuck, saddle billed storks, all the kingfishers one could hope to see, many many Ellies, many many many Tseste flies. The elephant are very, very calm and approach close to you as long as you are still and quiet, even leaving their young quite close to you. Very lovely to see and feel their gentle presence at such close quarters. Not one of elephant pictures were taken from a car. They are all on foot.

We were booked to “car camp” and then to have a few days in a permanent tent. Car camping is great. You are safe, you are in your own clean linen, no creepy crawlies can get you. However – early morning drives are virtually impossible as you have pack up everything and put the tent down before going – time consuming and a bit of a hassle leading to late departures. So, I was quite happy that our travel agent had booked us into a permanent tent down the way for a few nights.  This has a ‘bathroom’ attached therefore one can relax a little more in terms of beverages in the evening.

This is where it gets frustrating. Mana pools is a national treasure. Zimbabwe is a stunningly beautiful country filled with nice polite, well educated, obliging people. The national parks are the jewel in its crown. However, they are frequently not paid (as explained previously, money is not put into maintaining infrastructure so our tent had

Anyway, after one night, we decided to gap it and now we are on our way out. Such is the beauty of having a tent on the roof.  Wouldn’t have minded staying longer at Mana but would have returned to our roof tent. That however, would have entailed a visit to the parks board office on a daily basis, a wait of two hours and a move of our campsite on a daily basis at the whim of ZimParks. Seemed like a big hassle. Also, skipping a few days will give us more time in the Eastern Highlands an area I would like to see and it may be a bit cooler. Mana has been unbelievably hot. No fans, no air con no breeze and temps up to 46 degrees.

Another push factor in leaving was a veld fire to end all veld fires over the last few days on the Zambia side. The whole mountain was burning which is heartbreaking to see. In addition to being heartbreaking the smoke haze was pretty oppressive this morning and pretty chest constricting last night.  On climbing the escarpment out of Mana, the visibility was very poor even obscuring the sun to a degree.

It was a fun last night though. Our tally for last night

On our way up the escarpment we were waved over for an abnormal load. This was it. A new bucket for the Mana mine. 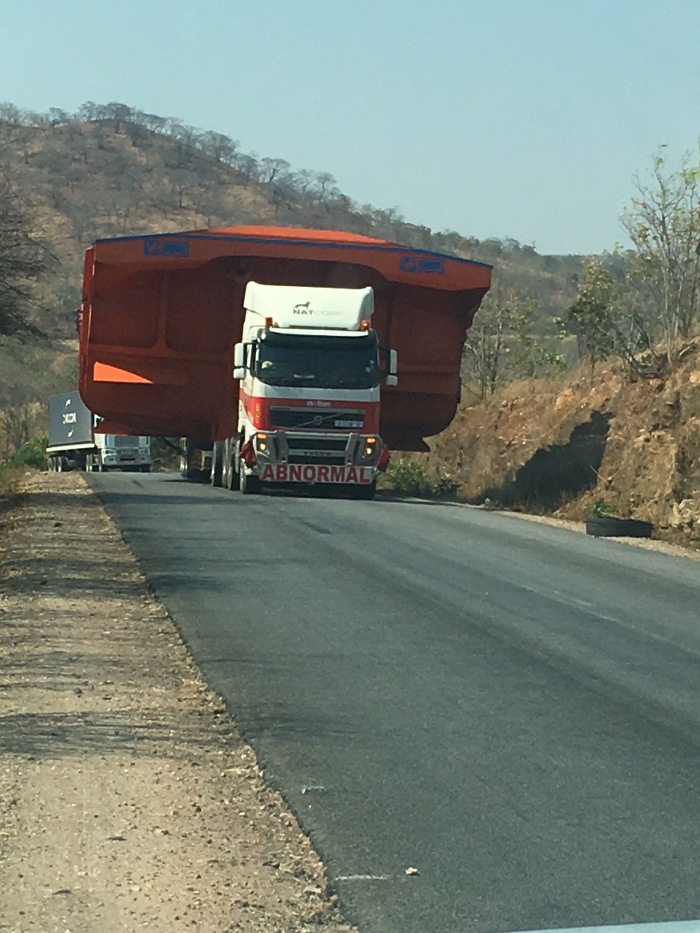 Despite being a UNESCO site they are going to start mining for heavy metals under the riverbed at Mana so I am pleased we have been there and done that before man continues to wreak his havoc.

Whilst we were waiting for this load to pass us Willy was talking to the truck driver behind. He is driving a truck of sugar from the Congo to Beira. Huge heavy duty truck that he says is buggered. Keeps breaking down. He put 10 l of oil into it in Lusaka and needs more but none to be had in Zimbabwe. He says there is no money to fix it, no money for food, he is eating bones!. He thought the last election would save them “bit nothing” poor bugger. 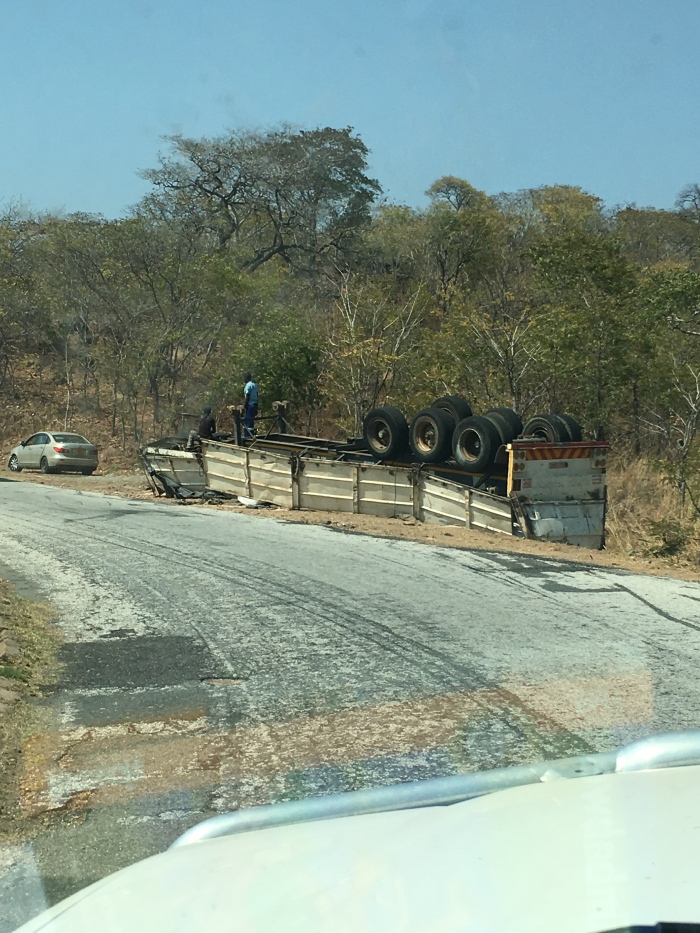 Fair few impressive accidents on the road – I haven’t been quick enough (or insensitive enough) to photograph many though.