We left our lovely hotel and headed off to Mlibizi. Not much in the way of road blocks any more. The bad old days of continual blocks requiring a bribe to get through have thankfully gone. Lauren told us a funny story form those days. Friends of theirs were stopped. An argument ensued about and alleged infringement (read bribe wanted) The driver was feeling un co-operative so argued. The passenger got out the car, opened the trailer and got his cooler box out and sat in his camp chair in the shade. The policeman asked him what he thought he was doing. He replied “look you started an argument with that guy. I know that man, he never gives up- so we will be here awhile and it is hot in the car. I’m making myself comfortable.

Mlibizi is a small (one building town) on the edge of Lake Kariba where the ferry stops. There is a very small motel with self- catering chalets. It is straight out of the sixties and seventies and just So charming. The cutlery crockery, pots are all worthy of being exhibits in a seventies museum. Right on the edge of the lake, fish eagles calling, a chalet attendant who brings you wood for the fire. Absolutely blissful. All for the grand sum of   $30.00 a night.

The group of retirees we met at Robins camp joined us there and also decided to pay the princely sum of $30 to chalet rather than camp. They are a group from the Eastern Cape birding group some of them ex Zimbabwean and some of them from SA.  We spent a lovey evening there. One of the gentlemen is a bit younger than Poppie would have been and remembers his name, though couldn’t put a name to his face. He too was in the territorials etc. Some of the others had Bob Nixon as their dentist etc. Lovely to make so many connections. We nicknamed one of the men Leonard as he was Leonard Baarts doppelganger in every way.

The next morning, we got up into a large puddle of water as unfortunately our loo had leaked all night! Luckily, we had put our bags etc off the floor so no real harm done.

Long wait for the ferry – turns out they had had to wait for a young girl to go to the clinic as she had malaria coming out of Mana. Apparently, the malaria is rampant in that area at the moment.

She was first off the ferry and whisked away by her travelling companions. Warning to us to very vigilant whilst there. Before she left I checked on the drug she had been given and will try to get some in Kariba.

Finally, everyone was off loaded. This is no mean feat with a very narrow gangplank and some large 4X4 cars and 4×4 trailers our lot was loaded on and we set off. So far, this year, the ferry has run eight times. Just no tourism at the moment. They obviously need a critical mass to run and we just hit it lucky with timing that coincided with the Eastern Cape birding group.

It started off being a wonderful cruise on the calm waters of a lake. We were given dinner (prepared on board) and spent another lovely evening chatting to the birders. Interesting lives and many of them knowing the Gripper and Aunty Mary well, some of them having been educated by Susan Hall (the Grippers grandmother) 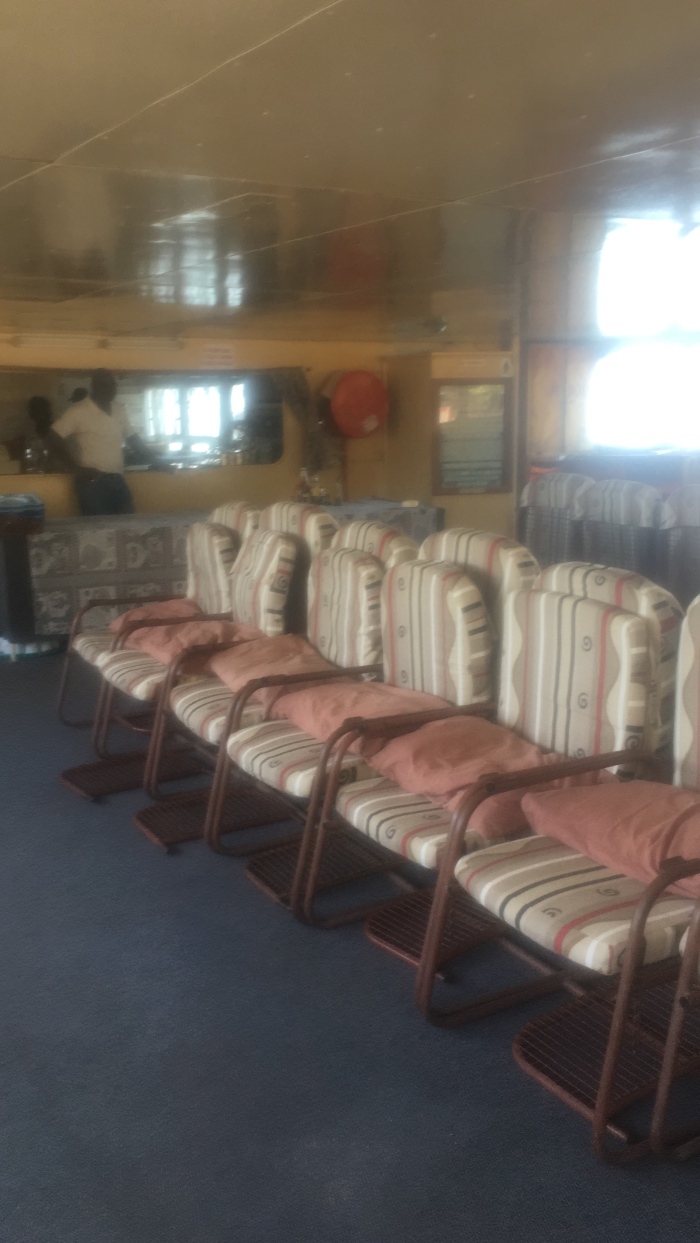 Sleeping arrangements are rows of chairs similar to sun-loungers that you put down when you want to sleep. So, us and roomies settled down as evening fell. I, being the person I am, carefully putting my Turkish towel over the pillow. Willy, being the person he is, putting his jumper over his pillow. 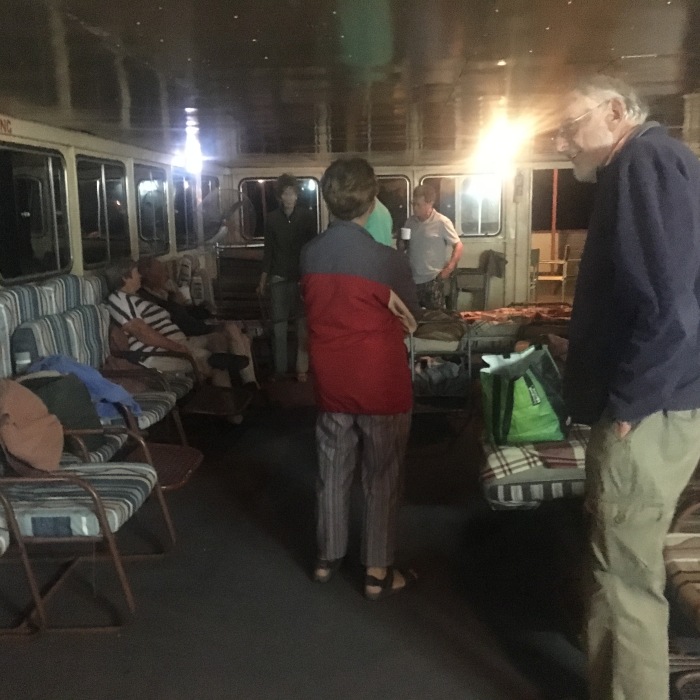 At about midnight the banging and clanging, started and eventually became a deafening roar, the staff rushed up and down and one definitely got the impression that there was a level of concern. The so named  “Binga wind” had come up and I had no idea how rough a lake could become. The metal hull crashed down over every wave for what seemed like hours. Not the roughest the staff had ever seen but not far from it. I was concerned that our car would have bounced around. Ours didn’t being so heavy but the one next to ours had done a bit of bouncing though no damage done miraculously.

Due to the head winds and bad conditions we were late arriving in Kariba but still had time to do a last-minute shop, go to the pharmacy which is a shack in the village with about five boxes of medicine and persuade him to sell me treatment dose of anti-malarial medicine and set off for Mana along with our birder friends. I have since found out that we were lucky to get it as most pharmacies don’t even have an asprin.

2 thoughts on “Victoria falls to Mlbizi to Kariba(3)”